Get fresh music recommendations delivered to your inbox every Friday.

by The Runaway Four 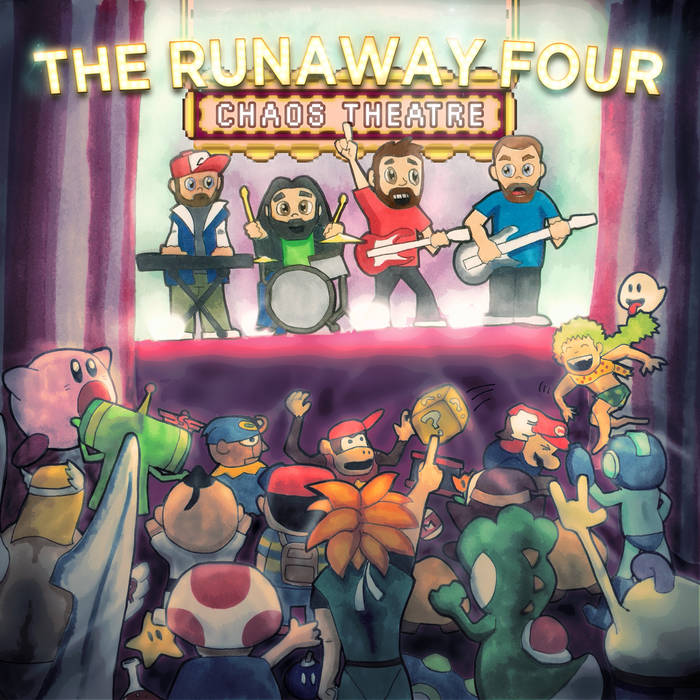 Daniel Lair The Runaway Four take remixing music to the next level by making incredibly medleys that just flow together like magic. Kinda just like sitting, listening, and trying to figure out what each song is from~ Favorite track: This Game is Baroquen.

bryface international music concern It's refreshing to know that there are bands who are not satisfied with straight videogame covers - but to instead assemble as many as possible into a frighteningly massive megadimensional tesseract of music that feels as if it's making a collective statement about video game music as a whole. R4's hard work and their passion for the games that form the repertoire definitely pay off here. A well-produced first release and definitely a sign of even greater things to come! Favorite track: Battle Royale.

The Runaway Four, Vancouver’s video game medley monsters, release their independent studio debut “Chaos Theatre” on January 20, 2017. This 45 minute sonic adventure contains 37 choice tunes from 31 video game titles, mixing popular favourites and hidden gems into 5 themed tracks. Medleys from past performances were selected to build a dynamic narrative through the course of the album, intended to give the listener an adventure for the ears.

The opening track, “This Game is Baroquen”, uses themes that highlight pre-classical musical devices of polyphony and counterpoint, and starts the journey on a light foot. Ice levels don't often come second, but “Boreal Bedlam”, the second track, keeps the fun going with melody-rich ice themes from the snowy woods of Earthbound to the cool, cool mountain of Super Mario 64. Track 3, “Magma Mayhem”, leans back on the rhythm section and heats things up with themes of fire, lava and the infernal, preparing listeners for the 17-minute epic to follow that is “Battle Royale”. The fourth track begins solemn and foreboding, but soon dives into heavy battle themes from Final Fantasy, Chrono Trigger, Pokémon and Donkey Kong franchises and ending with a triumphant fanfare. The closing title, “Your Sanctuary”, is an arrangement of themes from Earthbound exclusively. “Your Sanctuary” is the warm hug at the end of the journey, with a soft chord from the keys enveloping an endearing melody alongside contemplative bass harmonies and drum beats.

The Runaway Four mix, match and mash the best of video game music from classic tunes to hidden gems. With over 300 songs in their repertoire they span all genres and generations, giving all gamers something to enjoy from their themed medleys, timed visuals, cosplay and energetic performance. ... more

Bandcamp Daily  your guide to the world of Bandcamp